I love to make goals. (Perhaps a new goal should be to blog more, huh?) But here's the thing with me and goals. I don't wait until January 1st to make goals. I've never been one to conform to society, so why conform with goals, right? For me, I like to make goals around my birthday. Afterall, it truly is a new year. Since my birthday just passed, I decided it was time to make some goals.

Problem is, I couldn't think of any specific goals. Sure, there are lots of things I would like to do - if time, money and circumstances allowed. I needed some new goals, but I just wasn't sure what to declare as my new goals.

And then, it hit me. A mantra. I've got a mantra for my new year. I think it works for goals as well as a sort of mission statement. It's what I'm going to strive to live up to in the next year. Ready for it?

"Try new things. Hang on to the right old things. Be brave."

So there you have it, my "new year" goals. Let's see what kind of adventures I can come up with based on this life mantra.
Posted by Jen at 8:39 AM 2 comments:

There were once two caterpillars, one brown and one green, who lived in the same tree and became extremely close friends. Each morning they would find each other and then settle down on a large leaf where they could eat and talk throughout the day. Munching on leaves in the cool shade of the tree, they were as happy as two friends could possibly be.

Then, one late afternoon just as the sun was setting, a beautiful butterfly landed on the same leaf where the caterpillar was resting. The caterpillar had, of course, seen butterflies before, but he had never been so close to one of these beautiful creatures. He couldn't help but contrast the delicate body and wings of the butterfly with his own thick and clumsy appearance. To his surprise, the butterfly spoke to him.

"Oh, it's so good to see you again, old friend!" said the butterfly.

"What?" responded the caterpillar in surprise. "Are you talking to me?"

"Well, of course I am," responded the butterfly. "Don't you recognize me?"

The caterpillar, puzzled and embarrassed, said: "I'm sorry, but I really don't remember having met you before. Perhaps you're mistaking me for someone else."

"No, there is no mistake," said the butterfly, "but I suppose that I have changed a lot and so I shouldn't be surprised that you don't recognize me anymore. I was once a green caterpillar, and you and I spent many days together in this very tree."

Looking at the beautiful butterfly, the caterpillar was astonished and asked, "You were once my friend the green caterpillar? But how could that be? How could a caterpillar become a butterfly? That seems impossible."

"Well, it wasn't easy," admitted the butterfly, "but when I was a caterpillar I always believed that I had the power to change if I really wanted to. And to tell you the truth, changing into a butterfly wasn't even the hardest part. The hardest part was giving up being a caterpillar." (See also Trina Paulus, Hope for the Flowers [New York: Paulist Press, 1972].)

Thanks for the Ride

“Anyone who imagines that bliss is normal is going to waste a lot of time running around shouting that he’s been robbed. The fact is that most putts don’t drop, most beef is tough, most children grow up to just be people, most successful marriages require a high degree of mutual toleration, most jobs are more often dull than otherwise. Life is like an old time rail journey…delays…sidetracks, smoke, dust, cinders and jolts, interspersed only occasionally by beautiful vistas and thrilling burst of speed. The trick is to thank the Lord for letting you have the ride.”

Hey, long time no blog. Something very important brings me to the blogosphere today. Consider this a public service announcement (or just something never to do to me).

I cannot stand it when someone uses my personal email for their business gain. Let me explain.

You know how you give your email address out for church, to a friend, or another person as a means of communication? When someone gives you their email address for any of the above purposes, do not start using that email address to promote your new Avon, MaryKay, drink beverage (insert any number of MLM/Direct Selling companies here) business. I’m happy you’ve found a job that works for you, but unless I gave you my email address to specifically send me information about your product, please do not use it. In fact, it’s rather irritating and I no longer consider you a friend at this point in time.

For example, if you have my email address for visiting teaching purposes (and I admit, email sometimes comes in very handy for visiting teaching), I would really appreciate it if you didn’t send me 3 emails a day about your “awesome sale” or “clearance items.” Because not only have we not talked for 6 months, I really don’t want to buy your crap. And I really don’t want your excessive emails clogging up my inbox.

And furthermore, I happen to know quite a bit about emailing for business. While it may not be illegal, it does borderline on unethical to add my email to your mailing list without my permission.

Don’t even get me started about “friending” me on Facebook for this exact reason either. If I haven’t talked to you in the last year, chances are I’m not going to meet you for lunch to discuss “an awesome business opportunity you are sure I would be interested in.” This earns an automatic delete.

I'm so terribly sorry I've neglected you. I'll try to do better, I promise.

Thank you for another great year! It was especially wonderful to be able to participate in the parade this year. Two life long dreams have now come true thanks to you - driving a van and driving a van in a parade.

My goodness, you were a beast! But it was especially lovely to drive a van and "haul" stuff around.

Welcome! You know how much I love you! I can't wait to see your pretty leaves change color real soon.

The girl who loves fall time

Please tell me you are learning something! Please! If you aren't, then this gray hair is all for naught!

Your Young Women Leader who is prematurely going gray

I really do like you, I promise I do. And I'm super excited for you to come again. But please, can't you stop making me older? Because that is just not cool. Not cool at all.

The girl who keeps getting older but feels much, much younger

Three strikes and you are out! I think you are super cute and I enjoy wearing you, however, three times wearing you (including three washes) and you are still fading blue all over my white t-shirt. It's time for you to go bye bye. I wish we could remain friends, but it just isn't going to work out.

Every summer I take a trip with my friends to Cedar City to the Shakespeare Festival. We made the annual trip last weekend. It was certainly not a disappointment! I saw Romeo and Juliet, A Midsummers Night Dream, and Noises Off! (Which did keep its promise of 1 million laughs...or 999,999 in my case).

We headed to Cedar City on Friday afternoon. On the way we saw two beardies in a Volvo pulling a trailer full of carpet pad. Always interesting moments on I-15.

We saw our first play on Friday night. I chose to go see Romeo and Juliet with one of my friends while the other two went to Music Man. Romeo and Juliet was in the outdoor theater. As is custom in Utah during monsoon season, it rained. And rained a lot. The actors kept going and fortunately our seats were covered. Others in the theater were a little wet.

On Saturday morning we had some time to kill before the matinee. So we ventured south for a little shopping.

That afternoon we watched A Midsummers Night Dream and then I (like the nerd that I am) headed to the SUU library to do some work. Like a total idiot, I completely overbooked myself and had some freelance work to do. You know you've lost it when you spend vacation time in a library working. I need some help.

The last play we saw was Noises Off! It was very funny and I highly recommend. In fact, I recommend all the plays we saw this year. All were very well done.

Then, at 11:00 at night, we headed home. K is always such a good sport and drives us to and from our adventures. I'm thankful she's so good at staying awake, because I am not. Five minutes into the drive home and I was out!

Check off another summer adventure! This year is turning out to be a great summer! Too bad it's now August and the fun needs to start coming to a close. Boo! I want one more month of summer!
Posted by Jen at 4:53 PM No comments:

It's been about 3 years or so since I've taken a real vacation. So while technically Summer O' Fun is supposed to be activities that are done in your own area, I decided to make an exception this year with a little trip to California. Besides, when the CMan, Mr. Mster, and LizBit are involved, I have a hard time saying no.

Summer O' Fun California Style lasted an entire week. There was Disneying, beaching, Legoing, and lots of eating...which was fun at the time, but not so great now that I'm home. Enjoy a few highlights. 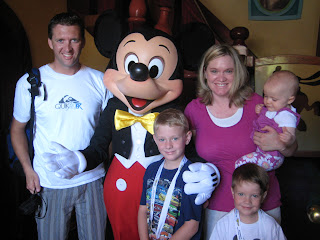 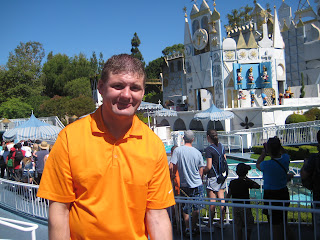 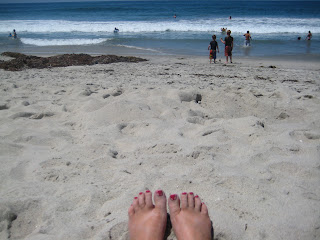 The beach...first time I can remember in my life being on the beach when it's warm. 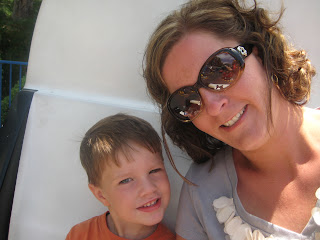 Going on rides with my buddies. 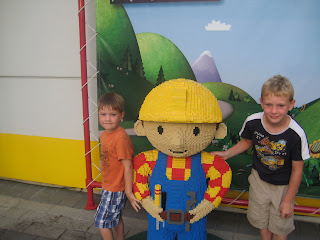 There truly are not very many legos in LegoLand. Which was disappointing to me.